LibraryThing is an online book catalog and meeting place for book lovers.  You can list your books, either your reading list or books you own.  Up to 200 books can be listed for free; unlimited title listing is available for $10 a year.  It will also recommend books you might like, based on your own book listings.

You can tag your books for easy searching and easy connecting with like-minded bibliophiles.  For the truly obsessive, you can arrange and catalog with Library of Congress and/or Dewey listings.  What fun!

You can also list books, with cover graphics, on your own blog, with a downloadable widget.  You can check your library listings, on your cell phone, while standing in a library or book store.  And LibraryThing touts itself as a MySpace for booklovers--a virtual social networking site.  Sounds like my kiind of people.

Compact book reviews for on-the-go folk can be found at Identity Theory's department called Book Rate.  Identity Theory itself is a great source for other book-related information.  Check out their great index of author interviews.

Reading Sylvia Plath, especially The Bell Jar, is a standard high school or college rite of passage.  And most readers are aware of the sadness of Plath's suicide,leaving two children behind and cutting short what most likely would have been a glowing literary career.  Plath's husband, poet Ted Hughes, had been unfaithful, and the stress of this caused Plath's fragile mental state to leave her unable to go on with her life.

Now comes a story in the Guardian that Plath was not the only woman in Hughes' life to commit suicide.  Assia Wevill, the other woman in Hughes' and Plath's marriage, killed herself and Shura, her daugher by Hughes, in the late sixties.  This second tragedy, somehow kept out of the news at the time, adds layers and complications to the Plath/Hughes tragedy.

Shura had become the core of Wevill's existence, and she was quite certain that if left motherless, the four-year-old, pampered child would be a second-class citizen in the Hughes household. She was afraid that Shura was too old to be adopted, and did not wish her to grow up alone as a foster child, an orphan. Her murderous act was thus the outcome of a distorted over-responsibility: "Execute yourself and your little self efficiently," Wevill had written in her diary three days before.

Soon after her death, Hughes wrote a poem in which he tormented himself about having been destructive towards his nearest and dearest "who were my life". He never published it. Was it because it contrasted with the account that he wished to leave for posterity? In 1990, he published a volume of 20 poems, Capriccio, which revolved around Wevill. In it, he blamed her for consciously burning herself on Plath's funeral pyre.

Powells offers an essay on writing by Laurell K. Hamilton, author of a number of fun and sexy fantasy novels.  Ms. Hamilton shares her thoughts on the character-building qualities of rejection letters.

The phone rang. It was an editor. An editor that I had sent the story, "Those Who Seek Forgiveness," to. A thrill went through me from my head to my toes. I thought, oh, my God, this is it. I'm going to sell my first short story ever on Thanksgiving, with my family here to witness it. It couldn't have been more perfect. The editor waxed poetic on how much he loved my story, how well written it was, how interesting the world and the characters were, then said, "But I can't buy it."

I thought I hadn't heard him. "Excuse me, what did you say?" He repeated it. I thought, you call me on Thanksgiving, in front of my family, to reject me "in person" on the phone. What was this, sadistic editor day? I said none of this out loud. The editor went on to explain that though he loved the story, it wasn't right for his zombie anthology because my zombies had a reason to rise from the grave. If I would rewrite the story so that my zombies just inexplicably rose from the grave, then he'd buy.

Special Topics in Calamity Physics--what a great title for a novel.  This is author Marisha Pessl's first and has gotten a lot of buzz for its quirky organization and style.  Powells reviewed it recently:

Chutzpah, Marisha Pessl has - and in abundance. Her thoroughly impressive debut, Special Topics in Calamity Physics, is a murder mystery/coming-of-age story that is organized as a course on great books, complete with copious annotations (both real and made up), visual aids (deliberately, I hope, amateurish pencil drawings), and the aforementioned exam. (Sample question: "Blue Van Meer has read too many books. T/F")

Fans of Dave Eggers's A Heartbreaking Work of Staggering Genius, and those who enjoyed the footnotes in Susannah Clarke's fabulous Jonathan Strange and Mr. Norrell as much as the plot, head for the bookstore with all speed. If you prefer a more Shaker-like type of storytelling, devoid of verbal curlicues and ironic flourishes, you might want to drop out of this particular class.

I'm heading (along with Special Topics in Calamity Physics in my carry-on) to our Nation's Capital for a long weekend with my favorite law student, AKA my daughter.  Back next week.

Today's Washington Post has an article  on the sad and swift decline of handwriting among today's students.  It's taken a very low spot on the priority list of teachers whose days are filled with getting students prepared to take standardized achievement tests, which require little handwriting at all.  As the Post points out, keyboarding killed shorthand and is apparently whacking away at cursive writing too.

When handwritten essays were added to this year's SAT, only 15% of the 1.5 million taking the test used longhand in their essays.  The rest used block printing.

Many educators shrug. Stacked up against teaching technology, foreign languages and the material on standardized tests, penmanship instruction seems a relic, teachers across the region say. But academics who specialize in writing acquisition argue that it's important cognitively, pointing to research that shows children without proficient handwriting skills produce simpler, shorter compositions, from the earliest grades.

Scholars who study original documents say the demise of handwriting will diminish the power and accuracy of future historical research. And others simply lament the loss of handwritten communication for its beauty, individualism and intimacy.

Big Day for a Little Library 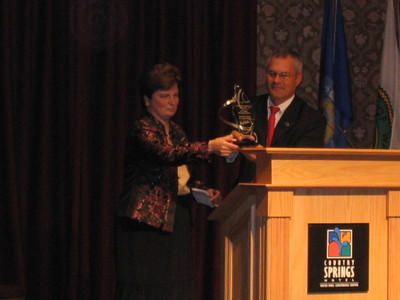 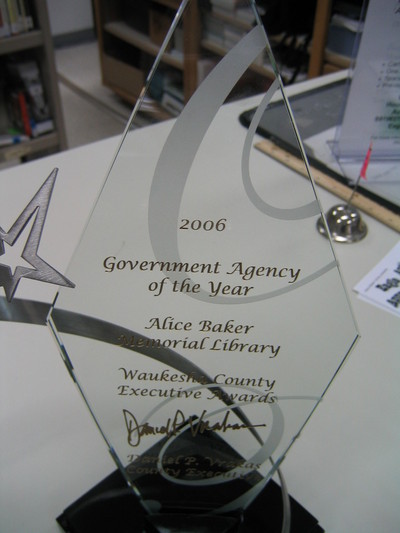 Alice Baker Library is this year's recipient of the Waukesha County Executive's Award for Government Agency of the Year.  The award luncheon was today, at the Country Springs Hotel in Waukesha.  Yay us!

One of the great pleasures of podcasts for me has been the discovery of Bookworm, a book review/author interview program broadcast by KCRW in Los Angeles.  It goes without saying that left to my own Wisconsin devices, I would never have heard this program.

The host is Michael Silverblatt, one of the most astute readers I have ever encountered.  His literary scope is absolutely encyclopedic.  Silverblatt not only reads the books he discusses, he gets inside them in the most thoughtful and analytical way.  It's obvious he digests his reading and devotes careful thought to it all.

It must be a delight to be an author interviewed on Bookworm.  Unlike some talk shows, where it's obvious the interviewer has only the most superficial knowledge of the book being discussed, Silverblatt is ready with observations on themes and comparisons to other writers and books that elicit unexpected insights from the authors.  Stacey Levine spoke about her fascination with girls' pulp fiction of the 50s and 60s, especially series like Cherry Ames, and how their scrambled syntax inspired the crafting of Frances Johnson.  Cherry Ames!

Some of the books and authors are scholarly and esoteric, some are very approachable.  This show has led me to authors and books I might not ever have found otherwise.  This is why I've been researching Jane Bowles in odd moments all day...

I subscribed to the podcast version of Bookworm through iTunes.  It's free.  If you have an iPod or other such device, you can be all signed up in minutes.