Seen here first: Sam Harris and The End of Faith.  He has an interview in Salon (one of the best online magazines, IMHO), where he expands on his ideas for a religion-free society.  Maybe you agree with Harris, maybe not.  But he'll get you thinking. 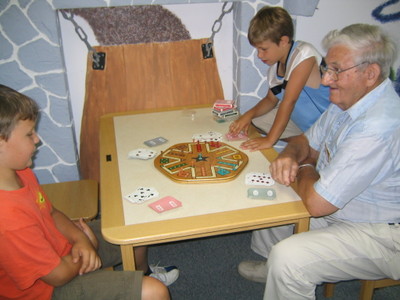 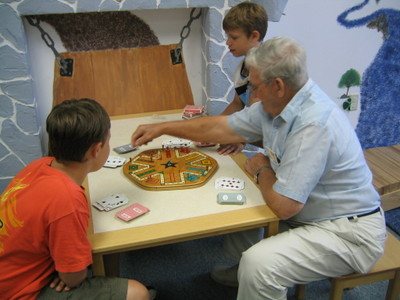 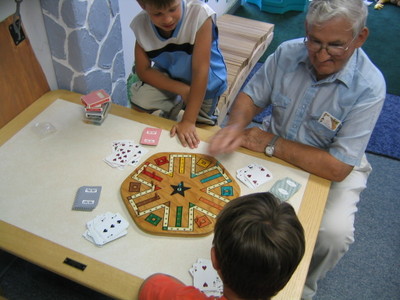 This week, we're promoting board game playing at the library.  Yesterday, it was Mr. Casey versus Nathan and Simon.  We won't say who won; that's not the point.  A good time was had by all.

My Life in France

There's a new Julia Child book :  My Life in France by Julia Child and Alex Prud'homme.  Mr. Prud'homme, Ms. Child's grandnephew, assisted her in the writing of the book, and it's said that she worked on it diligently throughout the last year of her life.  Bookmarks Magazine says it brings Ms. Child back to life, a "jocular, grandmotherly guide", who opened up the joy and richmess of fine food to many Americans.

Barbara I. King, at Blog of a Bookslut, has written a fine feature on this book:

Reared on a diet of Saturday Night Live parodies of Child’s robust presence and unique voice, I found this volume to be an eye-opener as well as a palate-stimulator. I came to respect Child’s immense passion and devotion to detail, and had fun following along as she turns a new life abroad into a labor of love.

The story starts in 1948 when she wasn’t yet celebrity Julia Child but just plain old 6’2” eager-American Julie, fresh off the boat from New York to Le Havre. En route to Paris on that first day in country, Julie and her husband Paul stopped in Rouen for lunch at Restaurant La Couronne. Julie spoke no French and knew nothing of French food. After a first taste of the sole meuniere (“a morsel of perfection”), she was never the same again. Tastes and textures surrounded her and seduced her as she settled into Parisian life. She was 37-years old: “By now I knew that French food was it for me. I couldn’t get over how absolutely delicious it was.”

The End of Faith

Do you think it's possible for a non-believer in God to be elected President of the United States?  It's an interesting question, and one of many controversial topics addressed in The End Of Faith: Religion, Terror, and the Future of Reason by Sam Harris, winner of the 2005 PEN Award for Nonfiction.  One of the cornerstones of the United States is freedom of religion.  But does that freedom truly extend to freedom from religion?

Harris, who  is a doctoral candidate in neuroscience, believes that organized religion and religious faith are hamstringing the modern world.  It's indisputable that religious differences lie at the heart of much conflict, both in history and in our own era.  Harris examines the roots of the major religions and shows how their basic writings can be seen to exhort the faithful to rise up against non-believers, in civil and non-civil ways.  He points to violent threads running through much of the Old and New Testaments as well as through the Koran.  What does this message mean to literal Bible and Koran believers?

But beyond the big topics of world upheaval, Harris sees religion and tolerance of religion as hampering education, progress, and the free exchange of ideas.  Controversial ideas, but well worth considering.

Harris has a website and maintains a forum for discussion.  I surfed through the forum, and while the discussion is heated, it seems to maintain a basic level of civility.

The book is well-researched if a bit strident.  Is Harris on the right track in his views?  Read and do some thinking.  And there's one of the joys of being American.  We all can freely do just that.