The Miraculous Journey of Edward Tulane

The big book review sites don't often pass along reviews of children's books.  So when they do, it has to be a very noteworthy book.

Powells passes along a review of The Miraculous Journey of Edward Tulane by Kate DiCamillo from The Christian Science Monitor. On the surface this book appears to be cut out of the same mold as The Velveteen Rabbit.  But  Edward Tulane is not a wholly sympathetic toy rabbit and the complexities of his journey make this a very different tale.

There's much about the story DiCamillo has chosen to write that could border on the saccharin. Loss and longing are two prominent themes, as is love itself, which Edward comes to appreciate, even feel, as his travels introduce him to a cast of lovely characters.

But DiCamillo keeps a tight hand on the reins: The focus stays on Edward's gradual awakening, which is not only adroitly rendered, but palatably sweet.

At first, Edward selfishly resists his transformation, but as his world opens up, his heart inevitably does, too. Later, he resists loving for different reasons: It's too painful. He's lost too much. But DiCamillo comes to the rescue with wise words from a fellow lost-toy soul -- and a somewhat anticipated, but still perfect, happy ending.

Everything about this book is beautiful: text, art, and the melding of text and art. Bagram Ibatoulline's sepia-toned drawings and full-color plates lend extra poignancy.

Our summer library programming is winding down but it's been an incredibly busy few weeks.  Events have ranged from picnics with concerts to animal shows, a pet parade, and mysteries to solve.  We've also supervised the ongoing summer reading challenges, handing out prizes and congratulations to the young participants.  This is a big part of every day during the summer program.  Our wonderful Maria, who has planned and supervised all of this, is well-deserving of a medal for the long hours and hard work she's devoted to making summer challenging and fun for area kids.

The kids and their families have responded enthusiastically.  Kid participation has increased nearly 50% over last year.  Amazing numbers for a small rural library like ours!

And there are pictures!  In the right-hand sidebar, click on any of the summer reading events photo albums to get a flavor of the fun we've been having this summer.

The Wisconsin Library Association has announced the awarding of its 2006 Elizabeth Burr/Worzalla Award for distinguished achievement in children's literature to Invisible by Pete Hautman.

The WLA also lists other outstanding children's books for 2006.

The National Portrait Gallery, which is part of the Smithsonian in Washington, D. C., has sponsored its first-ever portrait competition.  Officially called the Outwin Boochever Portrait Competition 2006, the purpose of the competition was to focus on excellence and innovation in portrait and sculpture in the United States.

If you follow the news, you may know that first prize in the competition was won by David Lenz, a painter from the Milwaukee area.  Hes super-realistic approach is both awe-inspiring and evocative.  His painting depicts his son Sam, as a kind of master of ceremonies, presenting the world to the viewer.

The other finalists are also gripping and affecting portraits.  You can vote for the People's Choice from among these portraits.

A rock star among librarians, Nancy Pearl has worked in several cities, most notably Seattle, where she originated the idea of a whole-city book club--choosing a book and sponsoring city-wide reading and discussion activities.  She's written two books full of reading recommendations, Book Lust, and More Book Lust.  She is even the model for the must-have Librarian Action Figure toy.

Nancy is a frequent guest on Morning Edition on National Public Radio, always ready with a book recommendation or two.  She also maintains a website with weekly book updates.

Rick Steves is the slightly rumpled and comfortably nerdy host of Europe Through the Back Door, a travel series seen regularly on PBS television stations.  He also has a great website, and markets very well-written and useful books about touring Europe as well as his own brand of travel gear.  His company runs tours of Europe, designed according to his own theory of European travel--no less than two nights in any location, eating with the locals, and lots of walking.

My daughter and I met a number of travellers seeing Portugal on a Rick Steves tour when we were there in 2002, and they were a happy and very diverse group.  If I ever do a European tour, I'd certainly put Rick Steve's tours at the top of my list.

Anyway, Rick Steves is now blogging.  He's currently touring several European countries and is posting dispatches from the field.  As in the fields of Austria, Spain or Scandinavia.  Great way to make a living, huh?

Link courstesy of Sites and Soundbytes.

The Stolen Child is a new novel by Keith Donahue.  There's an old bit of folklore about changelings, when fairies steal a child and leave behind a fairy double to take the child's place.  William Butler Yeats wrote a famous poem about it and Donahue's story starts from there.

NPR did a story on this book and on how word of mouth and Amazon reviews have propelled this book into best-seller status.  Now the big reviewers are taking note.  Powells has reprinted a review from The Washington Post.

Our literary culture is marinated in deep traditions of the fantastic and the supernatural, and we export those rich qualities in films and books on a spectacular industrial scale. It's unfortunate, then, that our sniffy literary establishment should furrow its brow at any and all prospecting around these fictional sources. Quite often important books are marginalized by obtuse prejudice, and I hope this will not be the fate of Keith Donohue's utterly absorbing "The Stolen Child".

It's the 1950s, and a 7-year-old boy is abducted by fey creatures from the woods who replace him with a changeling. The story is offered in a double narrative, from the viewpoints of both the abducted child and the changeling. The boy is inducted into the ways of the fey, who seem to dislike the word fairy in favor of hobgoblin . Indeed, these fey-folk are of the unsweetened variety: Some are casually libidinous, and all of them are delightfully grungy.

Meanwhile, the changeling recounts the task of passing himself off as the abducted boy. Everyone accepts him except the father, who seriously doubts his paternity. Already you begin to see the humane layering in this highly evolved story. And yet the metaphors and the allusions, coming thick and fast, never become mere allegory, nor do they threaten or overburden Donohue's commitment to the supernatural subject matter. It's an impressive double act, a fine example of what the French call the fantastique -- an intrusion into realism, a leak from the supernatural world into this one.

Summer Fun at the Library 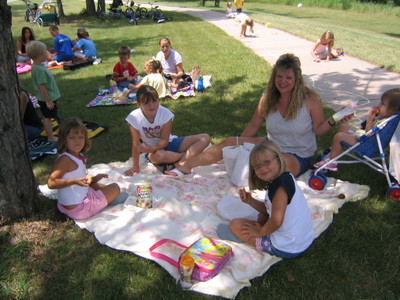 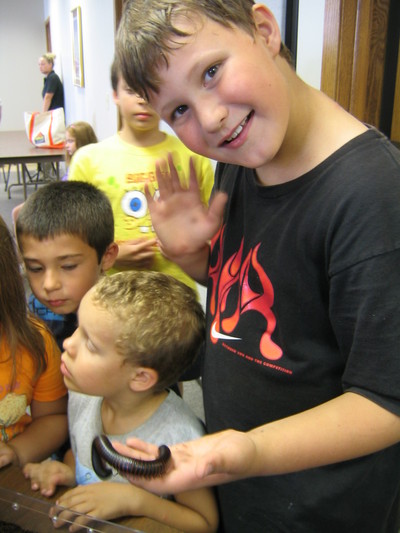 At the library yesterday--The Lunch Bunch picnic and a visit from the Creepy Crawly Zoo.  Nearly 150 people attended.  Nothing like food and bugs to bring in the throngs of summer readers!

Check out more pictures in the photo album on the right sidebar.

This is a little late for our boardgame extravaganza of last week (which had a lot of enthused participants of all ages) but could be very useful for lovers of Scrabble and Upwords anytime, as well as for crossword puzzle fanatics: More Words, a search site meant to unearth words for word games.

Link via Sites and Soundbytes.

Monica Ali, Bangladeshi born but raised in England, has been named by Granta as one of the twenty best young Bristish novelists.  Her first novel, Brick Lane, was published in 2003, to interesting reviews.  Her new book, Alentejo Blue, is more a gathering of vignettes, set in the cork-forested southern Portuguese region of Alentejo.  The stories paint vivid portraits of the characters.  The New York Times reviewer Liesl Schillinger says,

In these pages, Ali seems to be teasing out the question of how writing can be used to convey psyches with differing levels of perceptiveness. The chapters are notionally rooted by place, but they bear surprisingly little resemblance to one another — they're like soil samples taken from different corners of a vast and varied terrain, with nothing linking them but the accident of their geography. Ali seems intent on showing that geography can be illusory: her characters live and breathe not so much in the Alentejo that surrounds them as in the cul-de-sacs and alleys of their own thoughts.