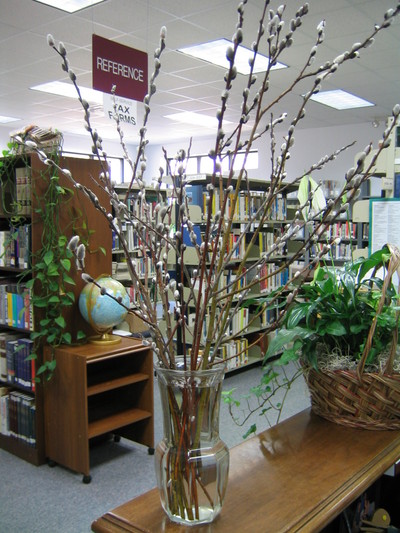 One more in the list of the wonderfully rewarding things about working in a small town library:  this morning when I arrived, a spray of pussy willows lay by the door.  I suspect our benefactor is a very sweet soft-spoken little man who also occasionally leaves flowers for us in the summer.

"Spring beckons!  All things to the call respond."   Ambrose Bierce.

Our Baby and Me Lapsit Storytime is this morning. The theme is Weather.  Here are the books featured:

Bear in Sunshine by Stella Blackstone

It's Raining, It's Pouring by Kin Eagle

The Weather by Olivia George

Don't you just love a good show biz biography?  Fever, The Life and Music of Miss Peggy Lee is just out, chronicling the achivements and impact of this lady, who sang with the Big Bands, sang on her own, and owned a song like few other singers.  She was also a composer, with over 200 songs to her credit.

Do you remember seeing her perform on TV, cool and blonde, with her minimalist style?    Powells shares a review of the book originally printed in Atlantic Monthly:

Peggy Lee, of course, was one of the first great singer-songwriters (she amassed more than 200 composing credits). She was also among her era’s finest recording artists (with her 1956 Black Coffee, which epitomized world-weary sophistication for a generation, she pioneered the "concept album"). She was, moreover, the greatest chanteuse of her age (her minimalist and confessional style perfectly suited the intimacy of the nightclub, and her act at Ciro’s in the 1940s and, above all, her engagement at Basin Street East in the winter of 1961 remain legendary). She was, as Hoefer declared, simply "the greatest white female jazz singer since Mildred Bailey."

A poignant tale to make the heart of the true romantic tremble: The New York Times has a story today about the many letters to Shakespeare's Juliet left at the tomb believed to be hers (if she existed at all) in Verona, Italy.

"Dear Juliet, I live on the third floor. My parents don't allow my boyfriend to come to my house. So I have to sneak him in. ..."

"Dear Juliet, my name is Riccardo. I am 10 years old." Riccardo is in love with an older woman, 14. He saw her in Verona the summer before. Does Juliet have news of her?

Hundreds of letters arrive each week, some addressed only to "Juliet, Verona".  The letters have been delivered for decades to the headquarters of the Club di Giulietta, a group of interested people who staff the house in Verona where Juliet is purported to have lived.  (Although the existence of Juliet is debatable, her legend is pretty important to tourism in Verona...)

For many years a man who was the custodian of the tomb believed to be Juliet's wrote courtly and chivalrous answers to the letter writers.  Every letter is now answered by staff members at the Club, sometimes with the help of translators living in Verona.  Lately, some letters in Chinese languages have begun to arrive.  But the main bulk of letters are from young people and are in English, probably because Romeo and Juliet is included in curricula for high school students in many English-speaking areas.

Two American sisters, Lise and Ceil Friedman, are collecting some of the letters and responses in a new book called Letters to Juliet, along with the story of the Club di Giulietta and some background notes on Shakespeare's Romeo and Juliet itself. The book will be published this coming autumn.

Dan Brown, author of The Da Vinci Code, is currently being sued in London by the authors of Holy Blood, Holy Grail for copyright infringement.  In the course of this case, Mr. Brown has filed a 69 page witness statement, which has been made public.  This statement is the subject of an article in the online magazine Slate, which finds it very interesting reading.

At first glance, the document bears the giddy signatures of a Dan Brown novel. It's chopped into staccato chapters; the language is awkward ("I quite literally woke up one morning and decided to write a thriller that delved into NSA"); and its hero is a simple man who is being pursued by evil forces he doesn't quite understand. Educated at Amherst and Phillips Exeter Academy, Brown had an unusual literary awakening. He did not go the usual route, wandering into a library, bumping into Hemingway and Flaubert, and resolving right there in the stacks to become a writer. Brown resolved to become a writer when he read Sidney Sheldon's The Doomsday Conspiracy while vacationing in Tahiti. "Up until this point," he writes, "almost all of my reading had been dictated by my schooling (primarily classics like Faulkner, Steinbeck, Dostoyevsky, Shakespeare, etc.) and I'd read almost no commercial fiction at all since the Hardy Boys as a child." The Sheldon book was a revelation, swift and merciless where Shakespeare, etc., had been slow and cumbersome. "[L]ife seemed to be trying to tell me something," Brown notes, adding, "I began to suspect that maybe I could write a 'thriller' of this type one day."

The whole country continues to grieve for the people of the Gulf Coast and all their losses, big and small, as a result of Hurricane Katrina last summer.  Blog of  Bookslut has a post (you'll need to scroll down to find it) linking to this Washington Post article about the loss of cookbooks and how New Orleans survivors are clamoring to buy, not the trendy celebrity chef or spa cookbooks, but the tried and true:  The Joy of Cooking, The Better Homes and Gardens Cookbook, and several intriguing-sounding Junior League volumes.

The Post article details the requests to New Orleans newspapers for favorite lost recipes published years ago--items like Island Rum Sweet Potatoes and Aunt May's Eggplant Fritters.  No doubt there are more massive concerns for residents of the devastated areas than regaining favorite recipes.  But an old favorite meal could provide such comfort in these difficult times.  Don't you wish you had a copy of the recipe for Aunt May's Eggplant Fritters just to be able to share it with the heartbroken family who lost it?

Storytime with Ms. Maria is about to begin.  Kids are arriving and selecting their favorite floor cushions.  Moms are wrangling strollers, toddlers, and library books.  Soon everyone settles down in the Big Room as Ms. Maria works her magic.

Today's theme is Weather and the following books are featured:

It's Raining, It's Pouring by Kin Eagle

The Wind Blew by Pat Hutchins

Just finished listening to The Darwin Conspiracy by John Darnton.

The Darwin Conspiracy concerns research into the life and works of Charles Darwin, particularly the question of why he waited 22 years to publish his theories on evolution and the origins of man.  A young couple chance onto Darwin family journals and pursue records of other Beagle passengers, coming up with some unusual answers.

I could be cynical and point out connections to The Da Vinci Code.  So many books these days seem to be knockoffs, in ways big or small, from the blockbuster Dan Brown book:  the dogged pursuit of clues hinted at in artwork or journals, the unmasking of long-buried scandals, etc., etc.

But truth be told, I enjoyed the story except for one lingering question: why would this author choose to portray Darwin as a thief, a plagiarist, and possibly a murderer?  I know nothing of Darnton except what biographical info is readily available. But in this era when Darwin's theories are still a lightning rod for controversy, what motivation might he have for assailing Darwin's reputation?

And a bigger question might be: what responsibility should a writer of fiction have toward the reputation of real people?

Mem Fox is a renowned children's author from Australia.  Among the best known of her many books is Possum Magic, which, aside from being a charming story, serves as an excellent child's introduction to Australia.

Ms. Fox has an excellent website, chock full of a great variety of information: everything from her biography, to lists of can't-miss books for kids, to recipes, to practical advice for would-be writers.  Check it out, and be sure to allow yourself enough time to fully explore the site.

Thanks to Loobylu for information on Mem Fox's site.

Saturday afternoon at 1 we'll be celebrating the birthday of that clever little monkey Curious George.  We're expecting a big crowd of kids and their families.  There will be stories, songs, games, crafts, and...banana cake.  Just what Curious George would have wanted!

Please join us!  It'll be more fun than the hypothetical barrel of monkeys.