Want to know one thing that really ticks me off?  The simplification or "retelling" of classic children's stories, as if today's American kids aren't bright enough to understand long words or, for example, British language usage.  It's one more symptom of the general dumbing down seen so often in many areas of life.  Don't let me get started on that.

I've seen "retold" Peter Rabbit stories.  That really gets my blood up, as I so enjoyed reading those stories, in their original form, with my own kids when they were small.  Beatirx Potter was a master of economy and slyness of word in those stories, and no one ought to ever even consider changing a word.  The words of Beatrix Potter are pretty close to sacred with me, and I'd love to see all little children have the chance to experience them.  And we can hope that no one is ever presumptuous enough to fiddle with Ms. Potter's wonderful and timeless illustrations.

Today's New York Times contains a story of a Beatrix Potter exhibit currently on view at the Eric Carle Museum of Picture Book Art in Cambridge, Massachusetts.  "Beatrix Potter in America" is a display of original artwork and Potter ephemera from American collections.  Ms. Potter had  long and friendly relationships with several Americans, including a librarian from New York City, and a young boy from Boston who gifted her with a pair of guinea pigs in the 1920s.  Ms. Potter in turn gifted this boy with a good deal of her original artwork, which is the centerpiece of the show.  The exhibit also includes items from the children's library at Princeton and the Free Library of Philadelphia.

The show is part of the 25th anniversary conference of the Beatrix Potter Society, which has about 800 members all over the world.  For Peter Rabbit's official website, click here.

The New York Times site may require registration to access, but it's free and well worth it IMHO.

Like it or not, the holiday season is fast bearing down on us.  That means lots of brainwork trying to figure out perfect gifts for family and friends.

Do you have cooking afficianados on your list?  NPR has reviewed a list of new and newly revised not-to-be-missed cookbooks on its site.  Any of these would make a most welcome gift for anyone on your list...or for yourself.  A new cookbook purchase for your own library is a gift that will keep givng to your family and friends over and over again.

And if that's not a sane and reasonable reason to buy a new book, then what is? 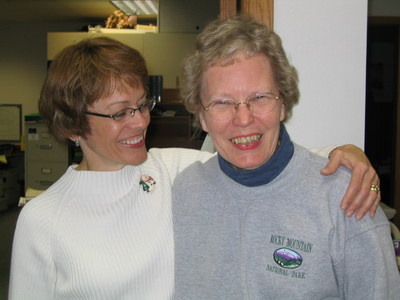 This makes the day--a visit from a couple well-loved faces we don't get to see nearly often enough any more.

McCourt is the author of the much beloved Angela's Ashes which is the harrowing story of his poverty-stricken upbringing in Ireland.  If you missed this most affecting book when it first came out, you ought to give it a read.  He followed Angela's Ashes with 'Tis, which told the tale of his coming to America.

Teacher Man follows his career as a dedicated teacher of English in New York City schools.  Library Journal says of it, "McCourt's characteristically vivid storytelling, with his rendering of the distinct and searing voices of particular students, enables his readers to see, hear, and feel this story, a voyage of discovery for students and teacher and, ultimately, all who read this marvelous book. A particular interest in the teaching profession is not required: Teacher Man relates to us all. Every bit as good as Angela's Ashes and 'Tis, this is highly recommended."

Reviews don't come much more glowing than this.  You can place a hold on this book now.

High tech reader's advisory: Literature-Map.  This is a site where you can enter the name of a favorite author and its search engine will suggest other authors you might enjoy.

This link is courtesy of Sites and Soundbytes, which points out that the fun of a site like this is both getting good ideas for enriching your reading and becoming righteously indignant at the suggestions made.

I've written about Carl Hiaasen before.  He turns out hilarious crime fiction, as well as maintaining an award-winning column in the Miami Herald. His latest book is Skinny Dip, a hugely enjoyable romp through the lives of some essentially clueless criminals in South Florida.

Hiaasen is the subject of an interview in the latest issue of the great Powell's bookstore online newsletter.  Enjoy this conversation with Carl Hiaasen, and if you haven't yet had the pleasure of reading his books, dive into one soon.  It would be the perfect antidote to the frenzied holiday season.

I had heard about it on NPR, that it began in Japan and that it's taken the British Isles by storm.  I knew that the Milwaukee Journal Sentinel had recently begun adding it to the daily puzzle offerings.  But I hadn't really understood the maddening addictiveness of Sudoko until I actually tried the online version.

It's a logic puzzle.  The puzzle is a square grid, containing nine nine-patch grids.  You have to figure out the arrangment of the numbers:  each ninepatch grid needs to contain the numbers 1 through 9, and each row of the puzzle, horizontally and vertically, must contain only 1 through 9 also.  No math computation need be done.  Just logic.

The Guardian has an interview with Rachel Zadok, the young author of Gem Squash Tokoloshe, the Whitbread nominated memoir of her growing up years under South Africa's apartheid.

When Rachel Zadok was growing up in apartheid South Africa, she had, like most other white children, a black nanny, Gladys. In her early teens her family moved, but Gladys, in many ways a second mother, did not come too. Apart from one visit Rachel never heard from her again, and it shocked her to discover that people so intimate, so close, could be "so disposable", simply because, in the end, they were black and for hire. It was "such a disturbing, strange, warped thing" that it made her determined that it would not happen again: with her mother's new helper, Margaret, she made sure that she built her own, separate relationship. She and Margaret still go for boozy lunches, and, in what seems, for Zadok, a typical mixture of active idealism and earthy worldliness, do a bit of gambling, with Zadok's money: "We see if we can win some money to get her children educated."

This book will soon be published by Macmillan, and then will be more easily available in the U.S.  While we're waiting, how about dipping into some other memoirs of life in Africa?

Don't Let's Go to the Dogs Tonight: An African Childhood  by Alexandra Fuller is another account, by a young white woman, of her growing up years in modern Africa.  Ms. Fuller lived in Rhodesia/Zimbabwe amid violence and war.  This book is also an award-winner.

The Flame Trees Of Thika:  Memories of an African Childhood by Elspeth Huxley chronicles her childhood in early twentieth century Kenya, amid the destructiveness of colonialization.  It's been dramarized on Masterpeice Theater, and the video version is also very worthwhile.

Out of Africa by Isak Dinesen is the grand-mommy of African memoirs.  Baroness Blixen owned a coffee plantation in Kenya from 1914 to 1931, and her account of those years is a modern classic.  Published in 1937, it reflects the racist attitudes of the time, but Dinesen is an enlightened observer and has much to say about African colonialism prior to World War II.

Todays' Preschool Story theme was Bath Time.  Ms. Maria presented a great session on the bubbly topics of splashing in the tub, blowing bubbles, and getting clean.  Our preschool patrons loved it all.  The following books were featured:

King Bidgood's in the Bathtub by Audrey Wood

Temperatures are falling and our thoughts are turning to keeping warm with wooly clothes, caps, and mittens.  We are thankful to the sheep who give up their fleece to keep us toasty all winter!  Please join us this Saturday, November 19, for a special Story Time featuring a costumed interpreter from Old World Wisconsin who will demonstrate the process of turning sheep fleece into wool.  She will also share stories with the kids.  We'll have a display of knitting and wool-related books for everyone, all available for checkout, of course.  That's Saturday, November 19, from 10:30 to 11:30 a.m.