From the Boston Globe comes this True Confessions-type article by a "heavy library user".  Apparently in some circles this is a bad thing?  Not to us.  This is what keeps us going, raises our circulation statistics, and makes our days interesting.  We have so much available for our patrons--books, audios, videos, toys, music, and just plain old information.  Go ahead--make use of us!

You might even call me a library addict. My husband, Allan, and I currently have 40-plus items checked out on the Newton Free Library account we share for convenience of tracking due dates. That's on the low end, since we recently made a large-scale return. More typically, we're up around 40 books, 20 CDs, and 6 DVDs.

But those numbers don't begin to display the depth of our library relationship. For starters, I've been using the electronic book reservation service since before there was Internet access. Back then, I had to dial directly into the library's computer system.

Link courtesy of Sites and Soundbytes.

Never underestimate the power and drive of a group of determined eleven year-olds on a mission.

The Eaglebots, the Eagleville Elementary Lego League group, were concerned about barriers to accessibility at Alice Baker Library.  Group members undertook needed improvements as their Lego League fundraising project this past year, with wildly successful results.

Tuesday evening they showcased their contributions at an Open House at the library.  The kids' fundraising purchased automatic doors, adaptive computer keyboards, larger computer monitors, a voice-activated dictation system, book grabbers, book totes, and wheeled book carts.  In addition, they authorized improvements to the outside pavement, making a smoother and more level entryway.  They also made larger and more readable signs for various areas in the library. 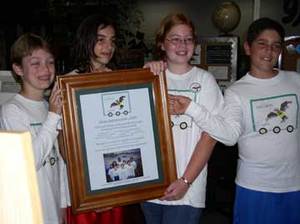 We appreciate their great Eaglebot enthusiasm and our patrons are enjoying the improvements at the library.

Terry McMillan is a very fun author to read.  She writes in a breezy down-to-earth style that's like a raucus get-together with an old friend.  Waiting to Exhale put McMillan on the map and How Stella Got Her Groove Back solidified her reputation.  Both those novels were made into memorable movies.

Her newest has just arrived at the library: The Interruption of Everything.  The plotline meets mid-life, with all its Little Surprises, head on, and is full of the same play and banter that have made McMillan's other novels such fun.

McMillan is interviewed in the current Bookpage.

Contrary to what her readers insist upon believing, Terry McMillan is not perpetually holed up in some swank Jamaican love crib dreaming up novels while dreadlocked Rasta cabana boys cater to her every whim. If you want to know the truth, this Stella got her groove back years ago and went on with her life in much the same way the rest of us have, ferrying her son Solomon to endless youth soccer matches and worrying about the state of the world.

"I guess everyone was thinking that I was this hotshot jet-setter, this famous author whose books had been turned into films, oh jeepers creepers, and here I am getting up in the morning, taking my kid to school and picking up other kids and I'm at soccer practice twice a week. This is how a jet-set best-selling author lives," she says by phone from her home in the San Francisco Bay area.

Here's an extensive website devoted to Christopher Paolini and the world he's created in his books.  Very detailed and apparently the work of several very talented teenagers.  Cool! 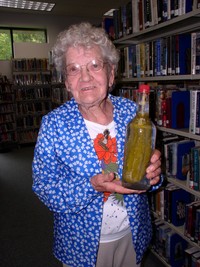 We never know what will happen next at a small town library.  Today Irma J. stopped by to share her summer project with us--she has grown a cucumber in a bottle.  This is a stellar feat of gardening and deserves the wide audience that appearing in the library blog will surely deliver.

Irma is one of the sunny faces that can brighten any day.  She promises to never grow up.

Christopher Paolini, a young author who has taken fantasy fans by storm, will speak Thursday, September 1, at 7 p.m. at the Milwaukee Public Library Centennial Hall.  This appearance is sponsored by Milwaukee's own Harry W. Schwartz Bookshops.  Tickets are available--$2 each--at any Schwartz location.  The doors open at 6.  For details, call 414-963-3111.

Teenreads offers an interview with Paolini.

Paolini's latest book, Eldest, is currently in process at the library.  Place your hold today--Alice Baker patrons get dibs on our copy.  Early reviews praise it highly, calling it superior to Paolini's first book Eragon.

Until I Find You by John Irving
Actor Jack Burns seeks a sense of identity and father figures while accommodating a host of overbearing and elaborately dysfunctional women in Irving's latest sprawling novel (after The Fourth Hand).  Eventually, he retraces his childhood steps across Europe, in search of the truth about his father—a quest that also emerges as a journey toward normalcy.

The Undomestic Goddess by Sophie Kinsella
Samantha Sweeting, the 29-year-old heroine of Kinsella's latest confection (after Shopaholic Sister), is on the verge of partnership at the prestigious London law firm Carter Spink—the Holy Grail of her entire workaholic life. But when she finds she has made a terrible, costly mistake just before the partnership decision, she's terrified of being fired. In a fog, she stumbles out of the building and onto the nearest train, which drops her in the countryside, where she wanders to a stately home. The nouveau riche lady of the house mistakes her for the new housekeeper—and Samantha is too astonished to correct her.

While Harry Potter and Co. have been tearing everything up buzz-wise all summer, there is Another Popular Children's Series That does OK in its own right.  Lemony Snicket has filled up a shelf with the dour and deadpan tales of the hapless Baudelaire children.  The language and style is delicious for children who are just beginning to learn about the fun of irony and sarcasm.

The official Lemony Snicket website carries on in a similar vein, offering news and notes on the books as well as games, activities, and other links.

Here is a site that offers explanations of allusions and imagery found in the Lemony Snicket books.  This gets scholarly, but that's part of the fun.

You may not be familiar with the name Danny Gregory, but in the last few months you probably have been regularly exposed to some of his work.  He's a gifted artist and illustrator who plies the advertising trade but manages to make time for a lot of sketching and general stopping-to-smell-the-roses-along-the-way.

He shares a lot of himself in his blog, Everyday Matters, and also shepherds a Yahoo discussion group on sketching and drawing.  He is working on a book, Creative License, which will be published this coming winter.  The book will capture in book form, what his blog and discussion group are all about--helping people unlock the inner artist and express themselves.

It's a great endeavor.  So many of us have an inner artist that has been securely locked up since our grade school days.  Danny says, "Set it free!"

In the world of bookstores, it seems that the big and showy comes at the cost of the small and personal.  Everyone is impressed by a big new Barnes and Noble or Borders store, but what are these retailing steamrollers doing to independent retailers?

Alternet states that there were 175 feminist bookstores in the United States in 1997, and 35 are left open today.  These shops were often the groundswell that propelled new writers into mainstream consciousness, as well as being a haven for finding obscure titles and kindred spirits.  Many of these shops thrive on quirkiness, but there seems to be little room left for quirkiness in today's market.  More's the pity.

A Room of One's Own, a 30-year-old store in Madison, Wis., is the second oldest and was one of the pioneers in popularizing titles such as Rita Mae Brown's Rubyfruit Jungle, now a feminist classic.

Most of the remaining women's bookstores can be found in small cities of the Midwest, South or coastal states. "There are virtually none left in big cities," says Linda Bubon, owner of Women and Children First, whose store, in a progressive part of Northside Chicago, is one of the big-city exceptions. Another is Bluestockings in New York City, which opened in 1999 and re-opened under new ownership, as a radical activist center, two years ago.

Although her 25-year-old store is still making it, Bubon says the last couple of years have been all uphill. While not wanting to detail the extent of the store's financial struggle, Bubon says Women and Children First has had to contend in the past eight years with the openings of seven Borders or Barnes and Noble stores within three miles of her front door. Moreover, she faces the expansion into book sales by Amazon.com, Borders, and Target. Her non-profit business, she says, cannot provide the discounts of her corporate counterparts.